Our Journey: 10 Years and Counting

Our story so far

The year is 2007, and a TV station is started – NBS Television, situated in a 2-bedroom apartment on UAP Building, Plot 1, Kimathi Avenue – in the middle of Uganda’s capital city, Kampala.

One year on, a 32-year-old ambitious businessman, Kin Kariisa, freshly sold on a media vision, acquires shares in the young TV brand, turning its fate around.

The 2-bedroom apartment is immediately no longer enough for the new owner’s lofty ambitions, and off to Media Plaza, the now-ambitious brand moves.

Within ten years at their new home, NBS Television grows tremendously, creating themselves the niche of being the go-to option for Ugandans seeking live-broadcasts of top

In 2014, Mr. Kin Kariisa acquired NBS Television fully, sparking a journey that would go on to see a new media platform every year for the next five years. 2015 was the year that

Salam TV was birthed, an Islam-inclined television station, the first of its kind in Uganda.

2016 presented us with Sanyuka TV, the home of Ugandan sport.

When 2017 came around, it was time for some groundbreaking, and in came Nile Post, your usual newspaper, this time digitized, bringing to life news that is fast, relevant, and

In 2019, Next Communications, a well-structured digital media agency aimed at providing digital marketing solutions for companies, was born. In the same year,

In this year, 2019, the now seven brands officially came together to form Next Media Services.

The ambitions have grown even more prominent by now, so much so that Media Plaza is no longer enough… Next Media Services needs a new home.

A search ensues, talks follow, an agreement is reached… Plot 13, Summit View Road, Naguru, is going to be that new home.

April 2020 marks the start of works on this property.

What a promising future ahead!

To rely on our people and the latest technology to provide Accurate, Relevant and timely content for Transformation

To be the leading Multimedia group for East Africa

People, Excellence, Teamwork, Integrity, Equity, and The Next Media pledge

The Next Media Services Transformer Maxims

A message from Next Media Services to our partners, customers, and friends.

Watch our #COVID19Ug Updates bulletin on NBS Television at 8:30pm Monday to Wednesday with Canary Mugume.

For Nation wide updates and information on the Corona Virus Pandemic, Please visit the MOH PORTAL 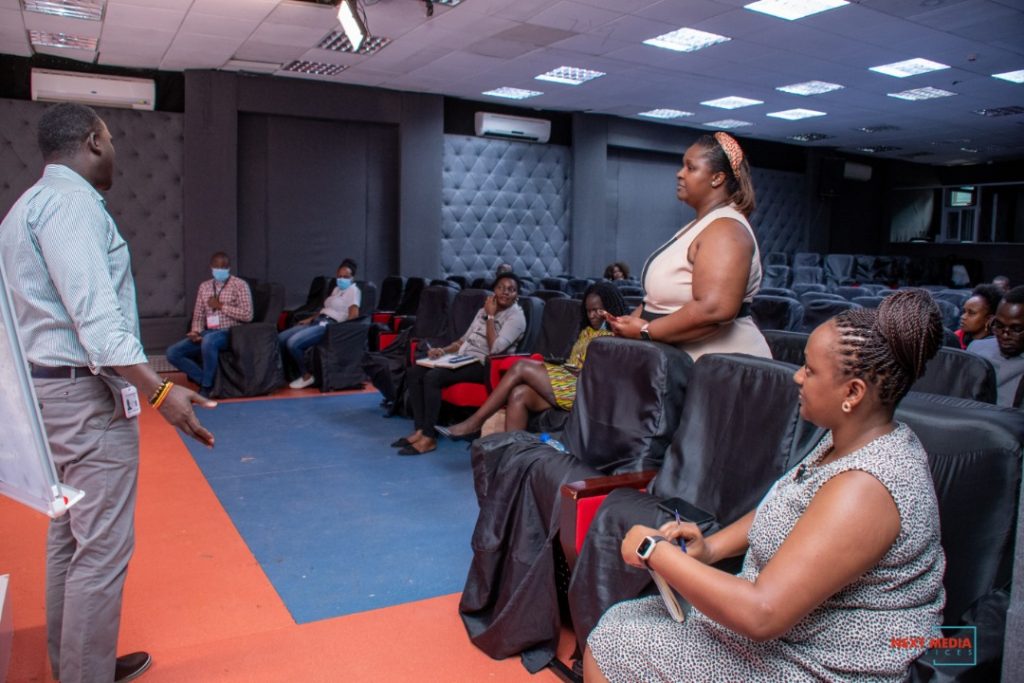 The CEO’s Mentorship Program was designed by Group CEO Kin Kariisa to build future leaders of Next Media Services and Uganda as a Nation, fostering skills for both sustainability of the Group and our culture of high performance.

The members of the program are directly mentored by the Group CEO and coached by members of the Group’s Top Management Team – Pamela Adongo (Chief Marketing Officer), Rachel Nyambura (Chief Commercial Officer), Doreen Katusiime Mweheire (Chief of Staff), and Paul Lwanga (Chief People Officer) – on topics ranging from staff motivation to growth and sustainability, financial literacy, leadership, among others.

The Next Media Services CEO Mentorship class group "Ubora".
Ubora means EXCELLENCE, and that is exactly what the team is comprised of, excellent individuals with a unique ability to execute a project or task in a functional and relatable way.
We strive to be excellent in whatever we do, and support our team members to be excellent.

We stand for Knowledge, Strength (in numbers) and Integrity

The Next Media Services CEO Mentorship class group "Next of Kin"
"Education is our Passport to the Future, for Tomorrow Belongs to the People who Prepare for it Today." Malcolm X
This is the foundation on which the Next Of Kin Mentorship Group is built. A caprice that is underlined in our very name.
To be a Next Of Kin (pun intended) is to be entrusted with carrying forward a legacy and executing a dream to the standard of its bearer. By mastering the basics and making it a priority to learn, unlearn and relearn the lessons imparted by the mentorship program, we are preparing for the future today… the future therefore belongs to us

The Next Media Services CEO Mentorship class group "Ubumwe"
We are more than just a mentorship group, it is a family. The Group name is derived from the Rwandese word ‘ "Ubumwe' meaning family and togetherness, the group strives for growth of each individual member in all the spheres of life.

Each member has unique attributes that make them stand out and it is by harnessing these individual traits as a communion that make "ubumwe" extraordinary. We believe in supporting each other through team work, combined growth and equality for each member.